An Enemy we Created 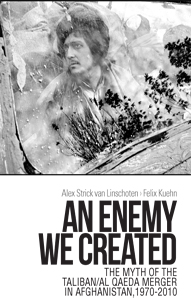 An Enemy we Created
The Myth of the Taliban/Al Qaeda Merger in Afghanistan, 1970-2012

This very long book contains a lot of detailed information, concentrating heavily on individuals and relationships, about the Afghan wars between 1970 and 2010. There is hardly any mention of oil or drugs, which many see as crucially important to the Afghan war, given the negotiations, involving UNOCAL and Halliburton, that preceded it, both with Karzai and the Taliban (see for example http://globalresearch.ca/articles/MAD201A.html). The narrative is arranged in a traditional academic chronological fashion, in nine of its eleven chapters, divided up according to phases. In each chapter there are sections on the Taliban and Al-Qaeda, their aims and objectives, and interactions between the two. The aim of the book is “not to offer an intelligence briefing” nor “to explore the relationship in any detail but the authors hold it is myopic to present [the Taliban and Al-Qaeda] as one and the same.” Unless of course it suits one’s military and commercial aims.

As a mainstay of their source material they use interviews with “Afghans and non-Afghans comprising 276 individuals and 47 groups”, as well as a large bibliography of “English-heritage literature”, although one might have expected more non-English sources, when a comment on the cover suggests the authors have “Arabic, Dari and Pashtu skills”. When writing about Khalid Sheikh Mohammad in the Biographies section, they admit that much of the information about him “came from interrogations”, and thus is “highly contested” (p. 465). Interestingly, though, they do quote passages from the Taliban rule books, as well as from Mullah Omar’s Eid messages, as well as recent Taliban statements following the killing of Osama bin Laden.