And Then We Work for God 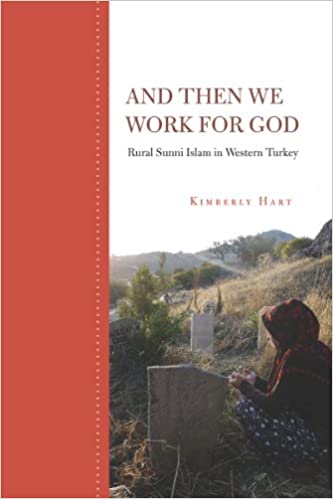 And Then We Work for God by Kimberly Hart draws on ethnographic research conducted over the span of more than a decade in rural Western Turkey. The book offers a detailed picture of “the messiness of how people think about and rationalize their decisions about piety”. (p. 243) She looks at the daily quest for salvation and “anxieties about the correctness of practice” (p. 5) in two neighbouring villages. She finds that people draw on multiple sources of legitimacy such as the state, historical memory, and religious communities and brotherhoods that direct everyday decisions. The book’s greatest contribution lies in its approach. Hart refutes the assertion explicitly made by Islamists, and implicitly made by scholars, that rural Turkey is an isolated, backward, and inconsequential space. Rather, she approaches it as dynamic. As the author notes in her introduction, ethnographic scholarship on orthodoxy, orthopraxy, and how people experience religion has often been urban-centred with the assumption that villages and their inhabitants are not part of the debate. Hart very convincingly proves that the village is also a site of dialogue and engagement through which orthodoxy is created. (pp. 5-6)