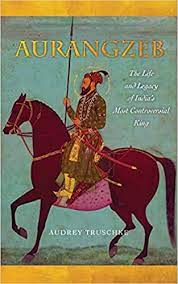 AURANGZEB
THE LIFE AND LEGACY OF INDIA’S MOST CONTROVERSIAL KING

The author Audry Truscke, a professor of history at the Rutgers State University, New Jersey, mentions how she had to endure unprecedented pushback for daring to write a rather balanced and objective account of ‘the life of India’s most important emperor, Aurangzeb Alamgir.’ She ‘first formulated the book on social media because the Aurangzeb fever that has gripped modern India often surfaces most virulently on platforms such as Twitter and Facebook.’ It helped her to be aware that ‘writing about Aurangzeb, one of the most hated man in Indian history, is no light decision.’ Yet, she dared to embark on the project ‘to introduce the historical Aurangzeb – in all his complexity.’

In attempting to decipher that complexity, she begins by drawing a picture of a mournful eighty-eight year old emperor nearing the end of his long and eventful career in this world and preparing to proceed to the next. True to the teaching of Prophet Muhammad (peace and blessings be upon him), blessings and peace be upon him, who urged Muslims to ‘live in this world as strangers

or wayfarers’, Aurangzeb wrote to his sons, ‘I came as a stranger and I leave as a stranger’, and ‘God is here but my deemed eyes do not see His splendour.’ He also expressed deeper doubts about his achievements as a king, ‘I entirely lacked in rulership and protecting people.’ The author interpreted these self- analytical statements of a dying sovereign as ‘laments of his flaws and failure as a king.’ However, these are nothing more than natural reflection of any leader, especially a devout Muslim one. Success and failure in ruling a vast (encompassing 3.2 million square kilometres) and multi-dimensional country of 150 million people for half a century, could not be anything but difficult. As Jeremy Suri in his recent book on George Washington, The Impossible Presidency, writes, ‘Limiting failure and achieving some good along the way – that is the best we can expect’.