Damascus after the Muslim Conquest 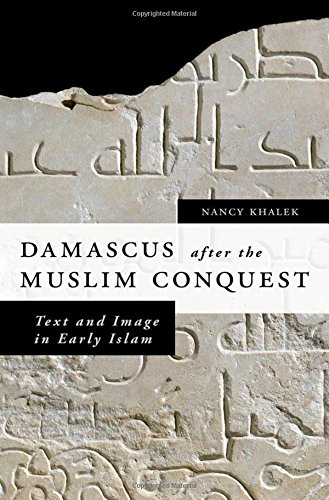 Damascus after the Muslim Conquest
Text and Image in Early Islam

Damascus, one of the most ancient cities in the Middle East, was founded in the Second Millennium B.C. (although no precise date of its foundation is known). Its long history was shaped by cross-currents of history over several millennia. As it evolved, it was ruled by successive foreign invaders, including Assyrians, Babylonians, Achaemenids, Greeks under Alexander (333 B.C.), Romans (64 B.C.), Seleucids, Nabateans and Byzantium. Damascus was visited by St. Paul and a church was subsequently built there. On the eve of the Muslim conquest in 636 C.E., the city had churches, monastic cells and monasteries representing the Christian presence in Syria. Nancy Khalek’s book is based on a thesis completed in December 2006 at Princeton University. The author claims that Muslim conquerors found Damascus overflowing with the sound of Christian activity and, in her opinion, early Islamic Damascus was viscerally a Christian place. (p. 3) In the early decades of Arab rule, the Muslim community was a minority in Syria. Therefore, the writer wonders how such a place was transformed into a centre of the Umayyad Caliphate, with Damascus as the capital of the first Arabian Muslim dynasty during the seventh and eighth century CE.