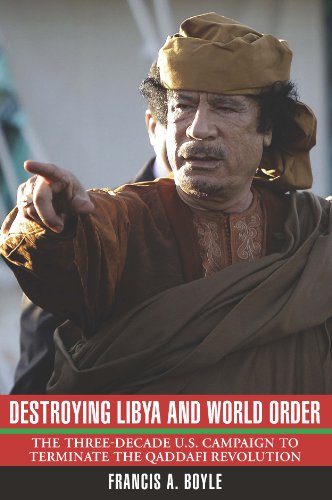 At one juncture, Colonel Qaddafi was a darling of the West and Libya had one of the best booming economies in the Arab world. Qaddafi was a progressive leader who intended for Libya to stand shoulder to shoulder with the first world countries. He was indeed a dictator who ruled with an iron fist and abused the basic rights of his people. For decades he was tolerated by the world hegemon, the United States of America, whose strategic interests he unfailingly served. Once he tried to chalk out an independent path, he was cut to size, killed by his own people and his country Libya destroyed.

Francis A Boyle, a leading American expert in international law, describes in this book how Libya was destroyed by the US over a period of three decades. In his Introduction, Boyle writes about the legacy of Qaddafi while surmising about the fate of Libya in the following words, ‘Colonel Qaddafi fought and died for Libya against the West just like his hero Omar Mukhtar had done. Indeed, on the basis of that precedent, I had predicted that Qaddafi would fight to the death for Libya and not flee his country in order to save his own life. Far exceeding my expectations, Colonel Qaddafi resisted the most powerful military alliance ever assembled in the history of the world for seven months. A real modern-day Hannibal!’