Encounters with Fate and Destiny 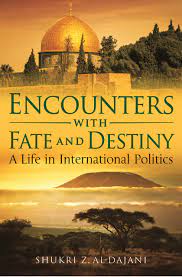 Encounters with Fate and Destiny
A Life in International Politics

The book under review is the autobiography of an international civil servant, Shukri al-Dajani, a Jordanian of Palestinian origin. Starting his career as a journalist, fate made him work for the Kuwaiti Oil Company for a few years, before landing a job at the International Labour Organization for the rest of his working life. He never harboured any high ambitions in life; all the three jobs he got in his life were quirks of fate. And he never fails to emphasize this point throughout his autobiography that he appropriately titled as Encounters with Fate and Destiny.

The author starts his story by tracing the history of the Dajani tribe that he claims is one of the most prominent Palestinian tribes. The Dajanis were the custodians of King David’s tomb on Mount Zion in Jerusalem for 500 years until the Israeli occupation in 1967. And it was in that holy city that Shukri opened his eyes in 1936. His mother died when he was a child which prompted his father to remarry, leaving him and his three sisters to the care of his aunt Husnieh, who lived with her pharmacist husband, Nassib, and their two daughters in Jerusalem. Shukri does not seem to hold a grudge against his father for having abandoned him for his second wife whom Shukri seems to have dislike. Rather, love for his father is a recurring theme throughout the book. Shukri narrates the story of their escape from Jerusalem when Jewish terrorist attacks targeting the Palestinians made it unsafe for them to live in the city. It was 1948 when Israel was created. He and his siblings were transported to Egypt where his father used to live with his new wife and their three children.