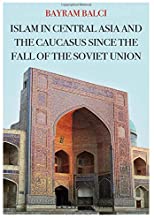 The book offers insights into the internal and external dynamics of how the prospects of Islam’s revival in Central Asia and Caucasia have experienced a sort of mutation in the thirty years since those states gained independence.

When the USSR crumbled in 1991, neighbouring and regional powers were eager to explore the possibilities of religious influence for several Islamic currents ensuing from Iran, Turkey, Egypt and beyond. Initially, Central Asian leaders avidly attempted to gauge where these currents might lead, but were soon held back by their urge to guard against exposure to them beyond certain limits. Well within the very first decade of independence, their exploration and experimentation went through a range of phases from rediscovery, to reorientation, to subsequent recalculation and eventually to efforts to resist Islamic revivalism (pp. 188–189). Their self-proclamation as part of Islam’s glorious and enlightened past remains ‘selective [and] corresponding to specific political motives and objectives’ (p. 2).