Islamic Law and the Law of Armed Conflict 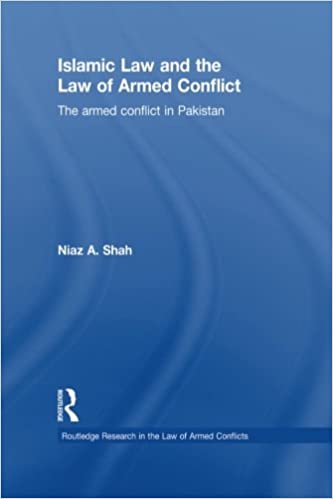 In recent times, particularly after 9/11, Islam and Muslims have barely been out of the limelight. In most cases the cause for this is anything but admirable. For whatever reason violence seem to attract media attention more than anything else. Journalists would risk life and limb to cover stories from war- torn countries, and some unfortunately end up paying the ultimate price with their lives. The epicentre of this global attention is Pakistan and the Western powers armed conflict with the Taliban. Niaz Shah attempts to elucidate the law of armed conflict in Islam in the book under review.

The book has six chapters. Chapter one is an introduction to the book and also presents a very terse discussion on Islamic Law. Chapter two looks into the Islamic Law of qital or fighting in general, while Chapter three investigates the internal conflict amongst Muslims. Chapter four compares the Islamic Law of armed engagement discussed in chapters two and three with the law of armed conflict identifying areas which are compatible and incompatible and where both may contribute to each other. Chapter five discusses the armed conflict in Pakistan and identifies three sets of legal rules that apply to this conflict: the law of armed conflict, Pakistani law and Islamic Law. This chapter also includes a brief discussion on the Afghan Taliban code of conduct for mujahidin issued on the 9th of May 2009. The reason for this is that the Pakistani version of the Taliban known as the TTP, or Tatirik-i-Taliban Pakistan, relies on this as a guide for engagement. Finally, chapter six examines the conduct of hostilities by the TTP and the security forces of Pakistan.