JIHADI AUDIOVISUALITY AND ITS ENTANGLEMENTS: 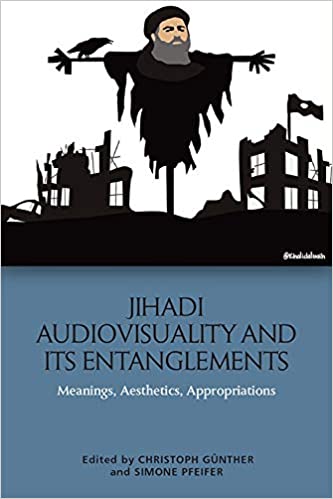 The rise of the Islamic State (then known as the Islamic State of Iraq and al- Sham, ISIS/ISIL) as a jihadi rebel proto-state in 2013–2014 and its rapid conquest of territories in Syria and Iraq, coupled with the launch of a multifaceted mass media campaign online, brought jihadi multimedia to the public eye. The sheer number of Islamic State media products outpaced all of the organization’s jihadi rivals with the group churning out ultimately hundreds of thousands of photographs, written/print statements and other publications, films and videos, radio broadcasts, textbooks, graphic designs, road and building signage, billboards and posters, and rhythmic chants (anashid), recitations of poetry, and mobile phone and computer apps, including several aimed specifically at children. Though IS did not pioneer jihadi use of social media (that was done several years earlier by the Somali jihadi rebel group Al-Shabaab), it did harness the communicative power of outlets including Twitter, YouTube, Facebook, and Telegram on a massive scale, surpassing all other jihadi organisations including its chief rival, Al-Qaeda and that organization’s regional affiliates.