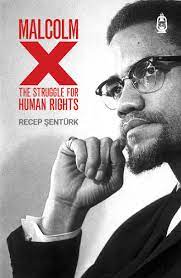 This succinct, and possibly too brief, tribute centred on the gargantuan struggle for human rights enacted by El-Hajj Malik El-Shabazz, more famously known as Malcolm X, suggests further insight into the life and work of a legendary iconic Muslim, produced by a Turkish Muslim academic. Most of the major works depicting Malcolm’s life including Alex Haley’s autobiography, Spike Lee’s film, ‘Malcolm X,’ and Les Payne’s acclaimed ‘The Dead are Arising’ portray Malcolm’s enduring impact and influence, largely derived from a non-Muslim perspective. The text under discussion here provides a welcome Islamic infusion, seeing the centrality of Islamic concepts to a profound religious transformation.

The author details the dissolution of Malcolm’s Christian based childhood by the vicious apparatus of the institutionally racist American state: his bravely outspoken father, Earl Little, active in Marcus Garvey’s political movement was presumed murdered by the Ku Klux Klan, while his equally courageous widowed mother, Louise, bereft of financial and emotional support became increasingly unwell and struggled to solely provide and care for seven children, which led to a psychological breakdown and subsequent committal to a mental institution, where she spent the remainder of her life. Malcolm’s youthful ambitions to become a lawyer were stifled by the poisonous comments of a racist school teacher who squashed his aspirations by stating that he was only fit for carpentry. An unsuccessful foster placement led to his initial confinement in a home for disruptive boys. As he progressed into early adulthood, his life curtailed by a lack of access to legitimate opportunities degraded into illicit activity – involving burglary, drugs, and pimping which resulted in a subsequent prison sentence.