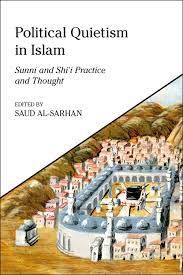 Political Quietism in Islam
Sunni and Shii Practice and Thought,

As the volume under review acknowledges, a reader picking up this book might be somewhat puzzled by the title. In an age in which Islam, and discourse about Islam, concerns action, activism, power, force, violence, it seems somewhat counterintuitive to speak about quietism in the political sphere – as such, it also acts as a qualification to Michael Cook’s recent (rather essentialising and problematic) insistence on Islam as a ‘political religion’. Quietism can potentially take many different forms as indeed might activism; one assumes that political activism is not just about seizing power and wielding it but includes subtle ways of influencing power including the exhortation to ‘legality’ and loyalism. Here, quietism is taken to mean that Muslims should not question or oppose their leaders; rather, believers should concentrate on personal piety, the performance of religious rituals, and individual cultivation of ethics. Of course, this begs what we might mean by every single one of these concepts. And even a quietist espousal of loyalism could be activist in the sense that it is actively opposed to resistance theories and rebellious action. The volume is divided into three sections: the first containing two chapters engages with the very notion of quietism from a theoretical perspective and a historical diachronic analysis; the second section considers political quietism in classical Islam by which one assumes they mean the classical period before the end of the [Abbasids; and the third and longest section is a diverse collection of articles on the modern period (defined from the 19th century to the present). What is missing is a consideration of how we might see the differential development of the notion of political quietism.