The Hundred Years’ War on Palestine 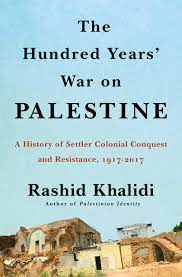 The Hundred Years’ War on Palestine
A History of Settler Colonialism and Resistance, 1917–2017

The Zionist dream has had a good press; the Arab nightmare that resulted, not so much. Rashid Khalidi’s book is a Palestinian redress. The book begins in 1899 with the mayor of Jerusalem writing a letter to Theodore Herzl saying the indigenous people of Palestine would not accept their displacement, ending with ‘in the name of God, let Palestine be left alone.’ This book is a consequence of Palestinians not being left alone.

That mayor of Jerusalem was Yusuf Diya, Khalidi’s great-great-great uncle. The letter is in the public Khalidi Library in Jerusalem, which was established by Khalidi’s grandfather, judge Hajj Raghib (whose house is on the cover). Khalidi’s father participated in the UN Security Council meeting about the 1967 War ceasefire which the young Khalidi witnessed. He is eminently eligible to map a first-person memoir onto academic history countering ‘Israel’s omnipresent narrative in the West, in which the Palestinians scarcely figured except as villains’ (p. 118). He is the Edward Said Professor of Modern Arab Studies at Columbia University, co-director of its Center for Palestine Studies and former advisor to the Palestine delegation during the Arab-Israeli peace negotiations of 1991–1993.