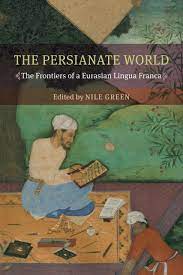 The Persianate World
The Frontiers of a Eurasian Lingua Franca

Since Marshall Hodgson posited in his monumental work The Venture of Islam (1974) that Islamic civilization, historically, is divisible ‘into an earlier ‘caliphal’ and a later ‘Persianate’ phase’, the Persianate character of later Muslim history has been imaginatively explored by a number of academic scholars1. Yet despite the widespread acceptance of this neologism, insists Nile Green, the editor of this synoptic work The Persianate World, ‘there has been little attempt to further define and delineate the concept, still less to test that lay hidden in this terminology’. The validity of the ‘Persianate hypothesis’, of the long-term dominance qua influence of Persian over the other languages and cultures of the eastern Islamic world, Green further claims, has been widely taken for granted. And this neatly sums up his rationale for the compilation of this work: Green does not wish to add another name to the existing list of largely exegetical and hermeneutical studies by ‘nativist’ academics whose concern is Persianate history and not its place in the world history, whose concern is the eastern Islamic world but not the Eurasian continent.